Over a decade ago, when social media was new and smartphones were still considered a luxury, I was helping to open a science museum in Philadelphia. Though my client’s organization was not part of any university, it was (and still is) absolutely an academic institution. Its research library is heavily used by academics the world over, fellowships awarded by the organization are prestigious and very hard to earn, and researchers and leadership are frequently tapped as sources by documentarians, journalists, and artists.

The museum would be my client’s first truly public-facing initiative, and my contacts there were nervous…doubly so after I suggested that to build excitement in advance of the opening, we invite local bloggers on hard-hat tours of the still-under-construction museum.

For many in academia, the same anxiety that existed around blogs and bloggers in the late aughts has shifted to anxiety around having active, individualized, social media accounts for institutional leadership.

At the time, people thought of blogs in one of two ways: either they were the diary you kept online, or they were snarky, gossipy rags like Gawker. The idea of blogs as reputable media outlets was still new to many — especially my clients. They were fine with inviting “real” media outlets to preview the museum, but their objections to bloggers ranged from: “but who even reads those things?” to “but what if they’re mean to us?”

I was working with academics who were petrified to embrace a new age of media. It took a lot of coaxing and a lot of education before they finally decided that maybe, just maybe, it would be okay if a few bloggers came to visit the museum.

For many in academia, the same anxiety that existed around blogs and bloggers in the late aughts has shifted to anxiety around having active, individualized, social media accounts for institutional leadership. Much like with my clients, if you’re trying to convince a bunch of academics to step fully into the 21st century, it’s going to take plenty of hand-holding.

High-ranking college and university administrators — by which I mean deans and up — are understandably reluctant to bare their souls all over social media. They might be concerned that their social media activity could imperil the school, their reputations, or both. No matter how many “opinions are my own” disclaimers they put in their bios, there will always be someone who tries to reach them through their personal profiles with a question or complaint better directed to the university, or who conflates their personal opinions with official university policy. And then there’s the very real concern that time spent on Twitter or Facebook is time not spent doing their actual jobs.

Listen: you’re not going to be able to force your college deans or university presidents who ardently hate social media to start tweeting. But if you get the sense that the major thing keeping them off social media is not a commitment to luddism but an addressable anxiety, you owe it to them to listen … and then to respond. They don’t want to answer questions about university policy on their personal accounts? They don’t have to. They’re worried about the time-suck? Help them set a schedule they can commit to. They’re worried about their personal opinions being used against them? They’re academics! They’ve already published pretty extensively under their own names so chances are that nothing they write in a Facebook post will be anathema to their schools.

Not all academic administrators are afraid of being “out there” on social media.

Arizona State University President Michael Crow tweets about once a day when he’s on the job. His presence is enthusiastic and full of pride for ASU students, alums, and faculty. He makes book recommendations, celebrates National Selfie Day, and participates in viral fundraising challenges, and he recently shared a very sweet tweet his wife posted to congratulate him on his 17th anniversary at the school.

Lafayette University’s Alison Byerly uses her Twitter profile for candid, behind-the-scenes (or behind-the-grill) photos, shares fun relics of the university’s past and its auspicious French namesake, responds playfully to her “@”s, and isn’t afraid to take on the occasional hot-button issue. Also unafraid to get political on Twitter is Michelle A. Williams, the dean of Harvard’s T.H. Chan School of Public Health.

Over on Facebook, University of Pennsylvania President Amy Gutmann shares a video of an impromptu serenade by the Penn Glee Club and a candid photo of her exiting a voting booth on the day of Pennsylvania’s primary election, while Texas A&M President Michael K. Young uses the platform to spotlight other faculty, celebrate university history, and denounce hate speech

Are all of these presidents and deans doing their social media by themselves? Probably not. But their accounts are all undeniably them. Not too scary, right?

So you’ve convinced your dean (or VP or president) that social media isn’t scary and all the cool deans are doing it. That doesn’t mean you should throw them into the deep end.

Work with them to create a plan for how often they should post (or how often you should post on their behalf) and — more importantly — what they should post about. University news, yes, but what else? Though your dean doesn’t spend as much time in the classroom as they used to, they’re still an expert in their field, so if an interesting paper or article comes out in that area — whether it’s Victorian novels or quantum physics — sharing that link with their own commentary would be perfectly on-brand and also interesting to their followers. Or maybe they’re a passionate gardener, or amateur photographer, or just really like going out to eat.

They shouldn’t hide these parts of who they are because they’re so committed to being a university spokesperson…but they do need to be deliberate enough about what they’re posting that they don’t seem too scattered or unfocused. Generally, sticking to four pillars of content will help keep a balance of content and establish a personal brand.

Just when you think you’ve made progress getting your dean on social media, they may decide to add a fifth pillar, or that they don’t have time to commit to being on social media. It happens!

That museum client of mine very nearly canceled our first blogger hardhat tour. And the second. Then they almost nixed the short-term blog we were working on, featuring a weekly photo with an update on the museum construction. (This was well before Instagram.)

It took a tremendous amount of self-control not to tell them they were wrong, and that I was the expert. I listened to their concerns, changed tactics where it seemed like doing so would make them more comfortable, and more than anything, met them with empathy when they had concerns. We got through it. We opened the museum, had multiple bloggers write beautiful posts about the building and its exhibits, and even launched a monthly event series that would bring still more people into the building.

It was scary, but in the end, it worked. And if you approach it the right way, your plan to get your university leadership onto social media will work, too. 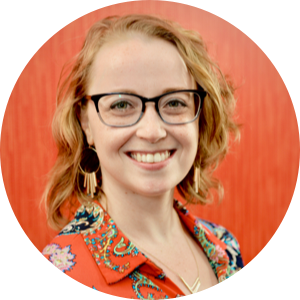 Jillian has an MFA in creative writing from Rutgers University Camden campus and a BA in English Literature/Creative Writing from the University of Pennsylvania. She lives in Philadelphia with her husband and their pets. Follow her on Twitter: @jillianivey.